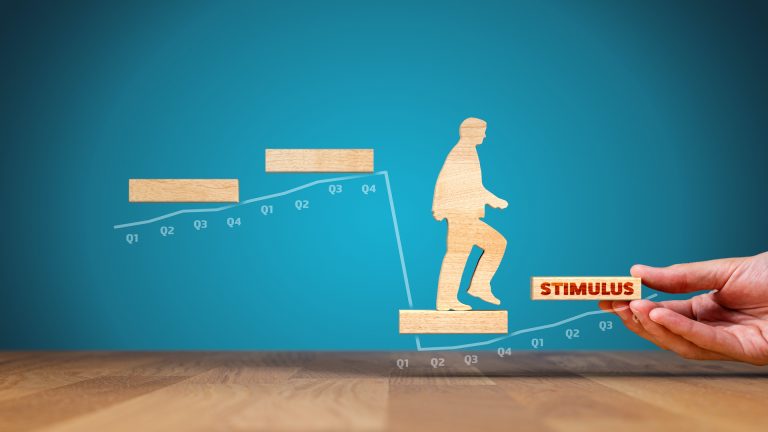 One year on from the first coronavirus lockdown, there have been seismic changes not only in our daily lives but also in the policy landscape. It is easy to become complacent about the extent of the economic policies put in place by governments in response to the crisis. What now seems almost normal was hugely radical a year ago. However, there is a clear rationale for much of what has been done over the past year that is underpinned by economic theory. Policymakers have had to adapt their traditional policy responses and use new tools and initiatives, but the reasons for doing so were fairly well understood and, perhaps as a consequence, had broad consensus. Here we take a step back to look at the theory, to understand both existing and new approaches to policy.

There are two main categories of economic policy: fiscal and monetary. Monetary policy responses have had to use new tools, like quantitative easing, that have emerged in recent years because the traditional use of interest rates has been constrained. Fiscal policy has also used new policies alongside traditional ones, with the most notable new additions being the job retention schemes which seek to maintain incomes and support business in a way that more conventional fiscal policy taxes and benefits could not achieve.

In this article we summarise the key points that featured in the perspective article that was released along side the economic commentary last week: “The policy response to Coronavirus: theory and application”. The full text of this article can be found here. This article has been jointly authored by two MSc students who are currently taking forward work placements with the Fraser of Allander Institute.

The Bank of England put in place a range of different measures in response to the economic impact of the pandemic. During its 19th March (2020) special Monetary Policy Committee meeting, the Bank resolved to cut interest rates to 0.1%. Due to the pre-existing low interest rate environment (implying lowering interest rates further was infeasible and could potentially achieve little) the main policy tool used by the Bank has been the asset purchasing program. The bank decided to embark on a £200 billion asset purchase program also known as quantitative easing (QE). Resolutions made in subsequent MPC meetings led to the unprecedented purchase of assets worth £895 billion by November 2020.

These are big numbers, but what were the intended effects of such policy action? The purchase of assets with newly created electronic money injects cash into the economy. This in turn provides financial institutions who sell their government bonds with resources they can use to either purchase new corporate or government bonds or assets. Conversely, they can lend out the cash to consumers or companies for a return. Availability of funds ensures that credit continues to flow in the economy even in an environment of reduced production as has been the case during the crisis. In addition, since the interest rates on government bonds act as a benchmark against which other interest rates are set, the fall in the interest rate on these bonds due to QE has led to lowering of interest rates in the economy.  This makes it cheaper to take out loans thereby encouraging borrowing and consumption. QE also acts as a confidence booster further encouraging firms to invest and borrowers to borrow, all of which have positive effects in times of reduced production.

Chart: Quantitative Easing in the UK since the financial crisis

Despite quantitative easing having been used in the past, for example during the financial crisis, its magnitude during this crisis gives some indication of the scale of this crisis.

Quantitative easing, however, is not the only unconventional tool left in the monetary policy box. Although not used in the UK yet, negative interest rates could be used to try and stimulate lending in the economy further.

Fiscal Policy is the use of government spending and taxes, which in the pandemic has tried to support jobs, household income, and economic activity. During the pandemic there have been restrictions that limit the amount firms can produce. If firms are producing less, then they need fewer workers, which can result in unemployment or reduced wages. This can lead to a downwards spiral because it reduces household income, reducing demand for goods and further reducing the amount firms needs to produce.  Scarring effects from the resulting unemployment mean that it is harder for the economy to recover from the crisis as workers have lost some skills and firms have lost workers with firm-specific knowledge.

To mitigate these effects, the government has two main levers of fiscal policy: automatic and discretionary. Automatic fiscal policy works without the government having to take any direct action. This comprises of the automatic increase to unemployment benefits as more people claim benefits during downturns in the economy. It is effective in being quick to reach people as was seen at the start of the pandemic with the large increase in the number of people claiming Universal Credit.

Discretionary fiscal policy, on the other hand, is a deliberate increase in spending/taxes by the government in response to a shock. This can be more targeted and of a magnitude necessary to mitigate the particular crisis’ effects but may be slower to implement than automatic fiscal policy. Examples of this lever in the current crisis include specific grants to businesses and wage subsidy schemes.

Wage subsidies have been used in other countries previously, but before the pandemic had never been considered by UK policymakers. They materialised as part of the government’s coronavirus response in the form of the Coronavirus Job Retention Scheme (CJRS) and the Self Employment Income Support Scheme (SEISS). Payments are made by the government to businesses or the self- employed in proportion to normal wage costs or self-employed income. There are a number of pros and cons with wage subsidies. One key risk is that the length of the disruption due to pandemic is such that there will have been such structural changes to the economy that there won’t be the same jobs to come back to once support ends.  However, in the absence of these schemes, it is likely that the level of unemployment would have been much higher and there has been general consensus, both here and abroad, that such schemes have been necessary given the upheaval of the last year.

Costs and benefits and looking forward

The response of economic policy to the pandemic has seen the implementation of traditional and unconventional tools to mitigate the economic impacts. Despite affecting the economy from different angles, fiscal and monetary policy have been complementary in mitigating and avoiding worse outcomes if they were not implemented.

The adoption of unconventional policy tools and the extent to which they are effective provide hope for the potential of policy to influence recovery and the pace of recovery. Complementarity of policy will hopefully continue to be key as the economy gets back on its feet.

Discretionary fiscal policy also has direct costs in terms of the amount of borrowing that has been required to fund it. According to the OBR, headline debt is at approximately 100 percent of GDP and is predicted to stay at this level for many years to come, yet servicing costs are at record lows. Given this low debt cost environment, most are content that taking on this level of debt was appropriate given the scale of the crisis. However, it is clear that this type of spending can’t continue indefinitely. The unwinding of support will be a delicate balancing that the government will need to perform in the year ahead.