The Scottish economy grew by 0.9% in February while UK GDP grew by 0.4% over the same period.

As of February, the Scottish economy is 7.4% lower than pre-pandemic levels while the UK economy is 7.8% below last February’s levels of output.

The hospitality industry remains the hardest hit sector of the economy however, with the easing of lockdown restrictions late last month, there is some hope for this industry, with google searches of Scottish pubs and restaurants peaking in mid-late April.

The claimant count has remained fairly stable since it sharply increased last spring however, with furlough in place until the end of September, the true impact of the pandemic on jobs will not be realised until later this year; unless the scheme is extended again.

Last week we published an election brief on the Scottish parties’ manifestos and what they mean for jobs as the economy recovers from this crisis.

Recently the Economics Observatory published an article on the impact of the COVID-19 pandemic on youth employment.

Finally, last week we published the latest Addleshaw Goddard Business Monitor report. Which highlighted that business sentiment has improved since the last quarter of 2020.

The Business Monitor survey was conducted among more than 500 Scottish firms and almost 90% of these businesses are confident that their chance of survival over the next six months is somewhat or very likely. The outlook for economic growth has also improved with 25% expecting a positive 12 months. 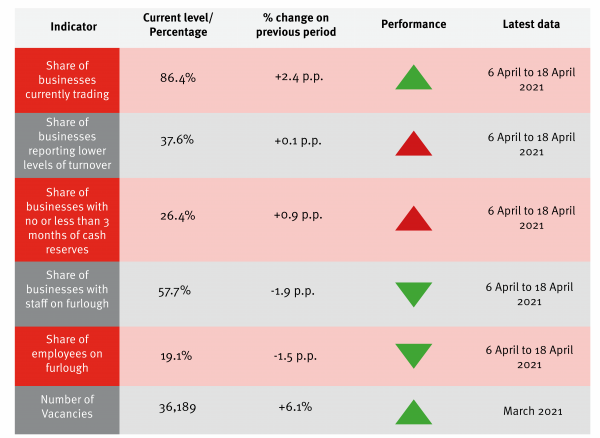 Chart 1: GDP index, Scotland, Jan 2020 – Feb 2021: Scottish GDP grew by 0.9% in February but remains 7.4% below pre-pandemic (February 2020) levels. Output in the construction sector grew by 1.6% in February whilst services and production grew by 1% and 0.9% respectively. Accommodation and food services remains the hardest hit sector with economic activity at 33% of its pre-pandemic levels.

Chart 2: Claimant count, Scotland, January 2020 – March 2021: The claimant count shows the number of people claiming benefits for the primary reason of being unemployed. The count crept up last month by 0.3% and has dropped from its August 2020 peak by 3.9%. Since almost doubling as Covid-19 restrictions began, the claimant count has shown little variation, even as the economy has moved in and out of varying restrictions.

Chart 3: Share of workforce furloughed, Scotland, 7 June 2020 – 18th April 2021: The accommodation & food services and the arts sectors continue to be the industries with the highest share of their workforce furloughed; with over 66% and 59% on furlough respectively. Just under a fifth of Scotland’s workforce was estimated to be on furlough in mid-April.

Chart 5: Google searches for different products and services, 29th March – 26th April 2021: There is some hope for the accommodation and food services sector as searches for pubs in Scotland have spiked as Covid-19 restrictions eased at the end of April. Searches for hairdressers peaked earlier in the month, in line with the earlier reopening. Searches for hairdressers, pubs and restaurants have all peaked earlier in the month in England than in Scotland, reflecting the slightly earlier easing of restrictions.

We review newly available data each fortnight and provide a regularly updated snapshot of indicators that can provide information on how the economy and household finances are changing. This allows us to monitor changes in advance of official data on the economy being released and also to capture key trends that will be missed by measures such as GDP. Each fortnight we investigate new sources from known data sources and use publicly available data.