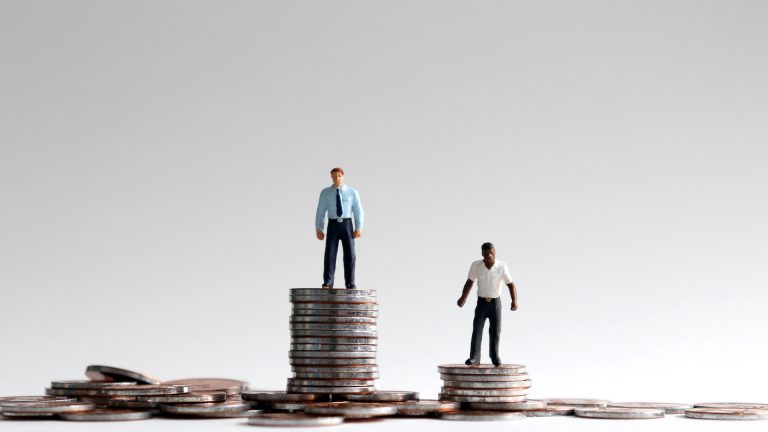 Scotland is a country that many people from a diverse range of backgrounds call home. Minority ethnic adults represented 4.6 % of people in Scotland in 2018 according to the ethnicity population overview on the Scottish Government’s Equality Evidence Finder.

However, economic exclusion for minority ethnic groups is a prevalent feature of our society, manifested through poorer labour market outcomes.

This article looks firstly at the evidence on labour market outcomes, and then explores some of the known reasons for these, on average, poorer outcomes. Lastly, we look at some of the implications of economic exclusion, including insights brought to the fore by Covid-19, and work that is going on in Scotland to try and improve outcomes.

This article uses the term minority ethnic throughout to refer to the non-white population. For more information, see the note at the end of this article on issues around terminology and data availability.

The average employment rate for minority ethnic groups is 59%. To put this into context, this employment rate is far lower than the rate seen in the worst performing local authorities in Scotland, places where there is a long history of structural unemployment and inactivity: Glasgow, Inverclyde and Dundee all have employment rates above 67%.

Lower employment rates are true for both men and women from minority ethnic groups although the ethnicity employment gap is larger for women than for men.

Chart 3 also shows a disaggregation by different ethnic groups. With the exception of mixed ethnicity males, economic activity rates are lower amongst all groups and particularly for women.

2. Pay is, on average, lower for minority ethnic people

For those in work, we see a tendency for minority ethnic groups to receive lower pay than their white peers.

According to ONS research, the pay gap in Scotland between white employees compared to minority ethnic groups was 10.2% in 2018.

Part of the reason for this pay gap is explained by sectoral splits which are shown in Table 1.

*Sample size for Bangladeshis too small to report separately

In common with the white population, there is a high number of people in minority ethnic groups working in the human health and social work sector (encompasses a range of pay rates) and in wholesale and retail trade (generally low paid). However, they are proportionately more likely to work in the Accommodation and Food Services sector than the white population, which is predominantly a low paid sector compared to the third most popular sector for the white population which is education.

Whilst there are similarities, employment by sector is not completely homogeneous across minority ethnic groups. For example, transport and storage is a common sector for Pakistanis, and financial and insurance activities is relatively common for the Black/African/Caribbean/Black British population.

3. What are origins of poorer labour market outcomes?

There are a number of reasons that help explain why there are poorer labour market outcomes. For example, analysis on ethnicity pay gaps by the ONS at the different reasons why differences in pay exist, for example, white British employees are, on average, older than the minority ethnic employee average and pay tends to increase with age. However, even after controlling for a range of factors including country of birth, age, sex, qualifications, sectors, occupations and disability status, statistically significant pay gaps remained for most minority ethnic groups.

Discrimination on grounds of race and religion exists is prevalent in Scotland. A survey commissioned by the University of Edinburgh in 2019 reported more than a third having experience of discrimination in the last two years, with 89% of these believing it was because of their perceived ethnicity. Of those who experienced discrimination, 25% said it had happened whilst applying for a job and 18% said it had affected their promotion chances.

4. What are the implications of poorer labour market outcomes and what is being done?

The combination of lower paid jobs on average and higher rates of economic inactivity means that is unfortunately of little surprise that poverty rates are on average higher for minority ethnic groups.

Living in poverty leads to a range of issues, including impacts on long term health. The vulnerability of those with underlying health conditions to Covid 19 has been widely talked about, and as in England, there is evidence of a higher mortality rate for some ethnic groups in Scotland. The link between lower socioeconomic status and higher mortality has been made, and this is likely to be one of the factors that links being in a minority ethnic group to higher mortality as well as related factors such as prevalence in low pay sectors with more exposure to the virus.

In addition, as set out in this article for the ESRC Coronavirus Economic Observatory, the coronavirus outbreak risks exacerbating many of the economic inequalities already in existence due to, for example, the higher proportion of people working in shutdown sectors such as Accommodation and Food Services.

Much is left to be understood around the impact of Coronavirus, both in the short term and the long term, but evidence suggests that it is highlighting underlying inequalities that have been present for many years.

Recently, the Scottish Government’s response to the Advisory Group on Economic Renewal reinforced the intention to ensure the inclusion of typically excluded groups, including minority ethnic groups, are embedded in economic recovery. This will hopefully build on what has already been learned from the implementation of the Race Equality Strategy. The most recent update published in March 2020 notes a number of initiatives, including trying to improve the numbers of under-represented groups in public sector employment. A full progress report on the first three years of the Race Equality Action Plan is due to be presented to parliament in Spring 2021.

Although Covid-19 has presented new challenges, understanding whether previous initiatives have worked (or not), and if there is evidence that long term trends had started to shift as a result, will be crucial to knowing how to get back on track post-pandemic. Effective ‘new’ action must learn from what has gone before.

A note on data and definitions:

There are numerous terms used to categorise ethnicity, and none appear to be wholly encompassing or accepted. Whilst use of terms that group together ethnicities can be helpful for identifying common issues, for example racism, it is problematic that often data can’t be disaggregated further. Survey data, relying on samples, struggle to capture the different groups who live here in Scotland and often have to combine together different groups in order for the sample to be large enough to ensure statistical accuracy. Improved data on ethnicity is an action in the Scottish Government’s Race Equality Action Plan.