The low carbon transition calls for ‘system change’ as Greta Thunberg, the 16-year-old Swedish climate activist, puts it so eloquently. Despite of the progress made, e.g. the phasing out of coal, a 100% low-carbon energy future is still a long way off for the UK.
It is clear, however, that changes in energy supply in the coming decades are likely to have major economic implications.

In our research, we examine the scale as well as the skill characteristics of employment related to current energy activities in the UK. This helps to understand the possible employment consequences of this transition.

By evaluating the level of employment directly in three energy activities – Oil & Gas Extraction, Electricity, and Gas – as well as employment supported by these activities in the rest of the economy – we make a number of important observations.

For the ‘Electric power generation, transmission & distribution sector'[1] almost 7 jobs in the wider economy are supported by each 1 in that sector, with this ratio being even higher for ‘Oil & gas extraction’ – in part due to that sectors strong connections to other sectors of the economy.

This reinforces the important economic role of energy activities in the UK, and their embeddedness in the UK economy through highly developed supply chains.

Second, we show the spectrum of occupation types and educational qualifications within – and supported by – activities in each sector. We can see for instance how the Oil & gas extraction sector has a significant share of direct employment at higher occupation categories.

Fig. 1a gives an illustration of this by reporting the proportion of each occupation type in that sector relative to overall UK employment as a whole. In the Oil & gas extraction sector, the proportion of people employed in Manager & Senior occupations (Category 1) is eight percentage points greater in that sector as compared to the UK. Employment in the sector is also “over-represented” relative to the UK average at ‘Process plant and machinery’ and ‘Skilled trades’ occupations.

Similar results for other sectors suggest that a more nuanced message around the skills classification of particular sectors would be useful. 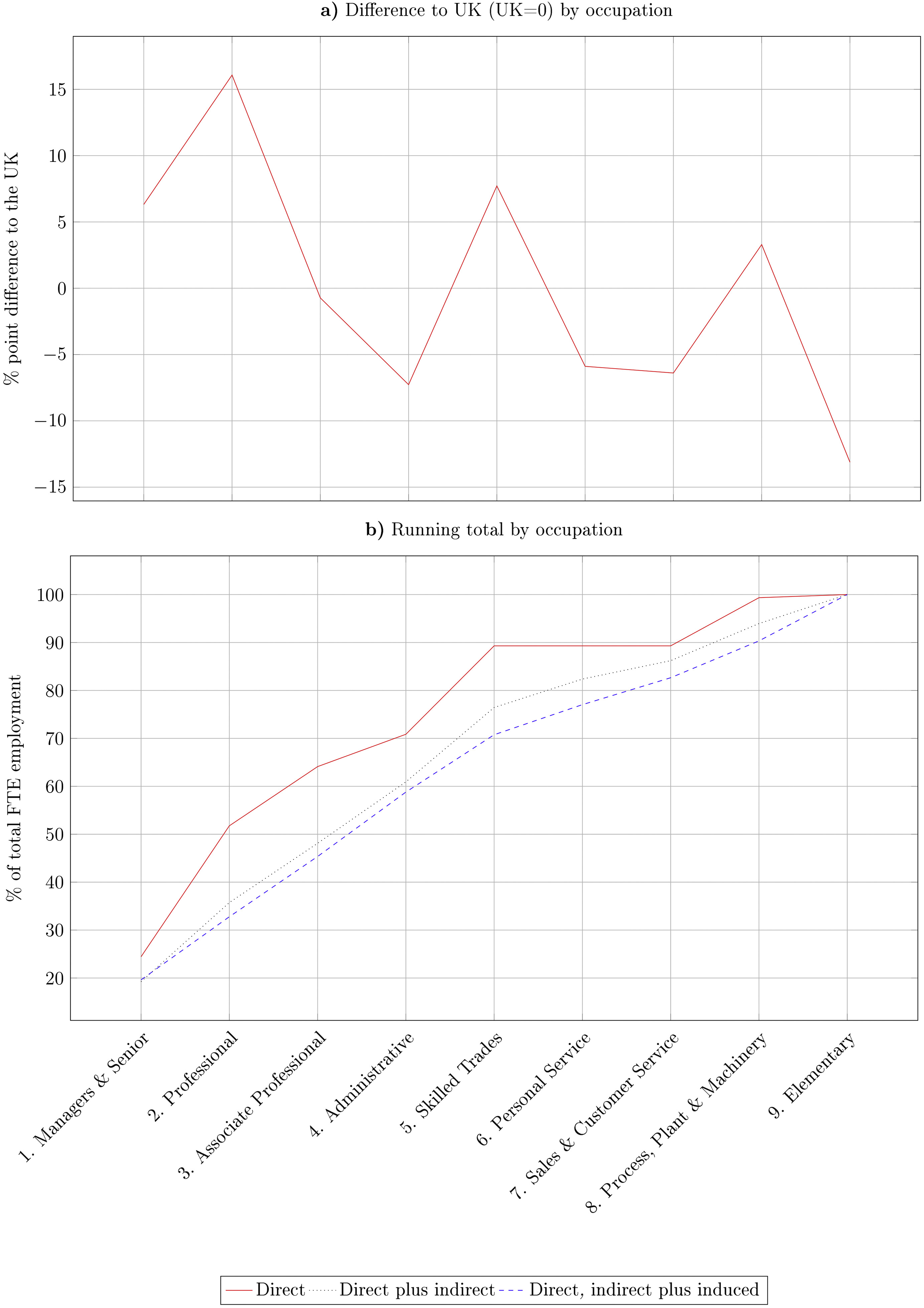 An important policy recommendation follows from this point. Changes in the level of activity in energy activities will have important consequences for the demand for labour throughout the economy, not only in the energy sector.

Our analysis also suggests that there will be important links between the level of labour demand and the need for different ‘skill’ levels, taking into account sectoral characteristics of employment. It is evident that the system-wide demands for skills – including not only the direct, but also knock-on effects across the economy – can change the pattern of labour market needs, which have implications for labour market planning in the low carbon transition.

As such, it is important to consider the employment consequences of the low carbon energy transition now rather than later as it will require significant foresight by policy makers to identify and meet future labour market requirements.

[1] We cannot currently go below this level of aggregation with existing economic accounts to, for instance, individual technologies, e.g. offshore wind generation.

Acknowledgements: This research was undertaken as part of the research programme of the UK Energy Research Centre, supported by the UK Research Councils under EPSRC award EP/L024756/1 and the Supergen Wind Hub under EPSRC award EP/L014106/1. Grant Allan also acknowledges support from the Scottish Government through the ClimateXChange programme. The opinions expressed in this paper reflect those of the authors. Errors and omissions remain the responsibility of the authors.