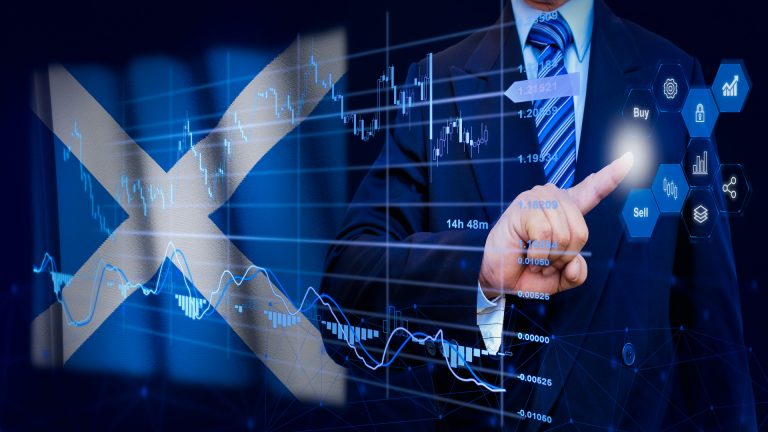 The economy will no doubt feature in most debates regarding the election. Given the current situation, it is difficult to unpick exactly what is going on, and what may unravel once restrictions, and protections, are lifted in the autumn.

The forthcoming economic recovery could take many shapes, and policymakers in all levels in government will have a role in shaping the recovery.

Beyond the recover from the pandemic remain some key challenges that could require big shifts in the type of economic activity that is prioritised in Scotland, for example, the road to net zero, demographic and technological change and the stubborn wedge between incomes of those at the top and bottom of the income distribution.

This brief discusses the current state of the Scottish Economy, some longer-term trends, and what all this could mean for the election to come.

The Scottish economy has been through an unprecedented year: the contractions we have seen during lockdown periods are enormous by historical standards. After a fall in GDP of 23% between February and April, we saw rapid growth through the Summer as the economy opened back up. The recovery flattened off during the Autumn as restrictions were re-imposed, and started to show falls moving into early 2021 as restrictions got even tighter.

The “K-Shaped” recovery to come?

One of the features of this economic crisis has been the differential impacts on different sectors. Businesses which have been able to adapt quickly to do much of their business remotely have been much less harder hit, whereas those who rely on social spending and face to face interaction have been much more severely impacted.

With restrictions likely to continue for some sectors for at least the first half of 2021, it is likely that this “twin-track” recovery will continue. Of particular concern are the impacts on the hospitality sector, which employs generally younger and lower paid workers.

Of course, Government policy interventions, in particular through the Job Retention Scheme, have protected millions of jobs throughout the period of the pandemic. Despite this, we know that thousands of jobs have been lost. Much of the impacts on employment are likely to manifest down the track as Government policy initiatives are rolled back. The Scottish Fiscal Commission and the Office for Budget Responsibility are both predicting that unemployment may top out at around 6.5% during 2021: with the peak coming once the furlough scheme is removed.

One thing that is certain about the outlook for the Scottish Economy is how uncertain it is. In our latest commentary, we set out three scenarios for growth: a central scenario and a more optimistic and pessimistic scenario.

Our central scenario sees the economy returning to pre-pandemic levels in October 2022, two and a half years after the start of the crisis: our more pessimistic scenario sees this happening in July 2023.

The crisis has not changed some of the key challenges that face the Scottish Economy: and in fact, many of them have been exacerbated. But the recovery also provides opportunities to consider these challenges afresh.

Transition to net zero
It is now widely accepted that the global economy needs to fundamentally change if climate change is to be tackled. The UK and Scottish Government’s commitments to net zero by 2050 and 2045 respectively is likely to require that the transformation of the economy is at the heart of economic recovery.

Firstly, it is clear that if Scotland (and the UK) are to meet their climate change ambitions, there will need to be a drive towards ever more renewable energy production. Significant progress has been made. In 2020, around 97 per cent of Scotland’s electricity demand was met from renewables – well above figures for the EU and UK.

For all of Scotland’s recent successes in renewables, we have much distance to travel. We lie bottom in the EU for renewable heat production, for example. And surface transport – road, aviation and shipping – is now an increasing source of emissions.

Demographic Change
Over the next few decades, Scotland’s population will grow more slowly than in the past, and it will age.

The population of Scotland is crucial to the sustainability and vibrancy of its economy. We can be pretty confident of what drives population change over the long-term. That is, rates of migration from overseas and within the UK; and natural change (i.e. births vs. deaths). The outlook for both of these looks challenging over the next 25 years.

Of course, an ageing population brings some challenges as more pressure is put on government budgets with a potentially shrinking tax base. Caring for those who are living increasingly longer, but often with some health issues, will fall on both the paid for care sector, and unpaid carers. Finding a way to better manage this future reality was part of the reason for the Independent Review of Adult Social Care, published earlier this year and the new government will face the challenge of implementing change.

Technological change
The pace of technological change is transforming the way in which businesses operate. It is also turning on its head how consumers shop and interact with each other. For many sectors, particularly those in the services industry, there is the potential that certain tasks may be automated in the future.

Our own modelling suggests that around 3 in 10 current jobs in Scotland contain tasks that have high potential to be automated. The digital adoption that we have seen in the wake of the pandemic has the potential to have long-lasting consequences for our economy.

Economy and Growth Challenge
The above discussion highlights some of the particular structural changes that will impact our economy in the years to come. Many of these changes are already shaping both the pace and balance of growth in Scotland.  After a period when most advanced economies grew at a steady pace – at around 2% per annum – growth rates have, over the past decade, slowed significantly. Chart 3. Add on top of this a major downturn as a result of this global pandemic and it is not difficult to imagine that a world of limited economic growth will continue for the foreseeable future.

The lack of improvement in productivity is a very complex policy problem.  There are many drivers of productivity: including business and public sector investment, the openness of our economy, and investment in skills and training.

Inequalities
Despite being a rich and prosperous economy, Scotland is home to significant inequalities, many of which will have been exacerbated by the economic crisis we are currently experiencing. The nature of the differential crisis and recovery to come mean we know that young people, women and the low paid are more likely to have been hit hardest.

Chart 5: Percentage of the most deprived datazones in Scotland by local authority

Of course, deprivation in Scotland is not evenly spread geographically. For example, 30% of the most deprived datazones in Scotland are in Glasgow City. Chart 5.

Even before the pandemic, 1 million people in Scotland were living in poverty in Scotland, which equates to 20% of the population: in addition, 25% of children in Scotland live in poverty.

This all sets the scene for a very different election campaign for May.

The next five years holds a lot in store. Economic fortunes in the next year will be influence heavily by Covid (again) and there could be considerable pain still to come once government support starts to be removed. This could see GDP falling again over the course of the year and expectations are that unemployment will rise.

However, the economy is much more than a cursory glance at GDP numbers and unemployment statistics will tell you. A sustainable, sufficient, quality of life that is attainable for all of Scotland’s population requires a lot of moving parts to be working together. The pandemic has shown us just how important some, often undervalued, parts of the economy actually are.

There is little doubt that getting the private sector back on its feet is an important cog in the wheel that will move us forward. Any future government activity in this area will need to be flexible and responsive and credibility and focus will be required in helping the private sector navigate its way out of this crisis with as many good quality jobs intact as possible.

In terms of supporting businesses, the Scottish Government has more limited powers than the UK Government, but there will be an expectation for the next government to have a clear strategy on how it helps business recover.

But there are other, perhaps less obvious, things that the next government will need to focus on to enable the recovery and to guide the economy onto a more sustainable footing. Whether or not aspects such as climate change, the care economy and inequality feature in the debate will be a mark of whether parties truly understand how the economy works.