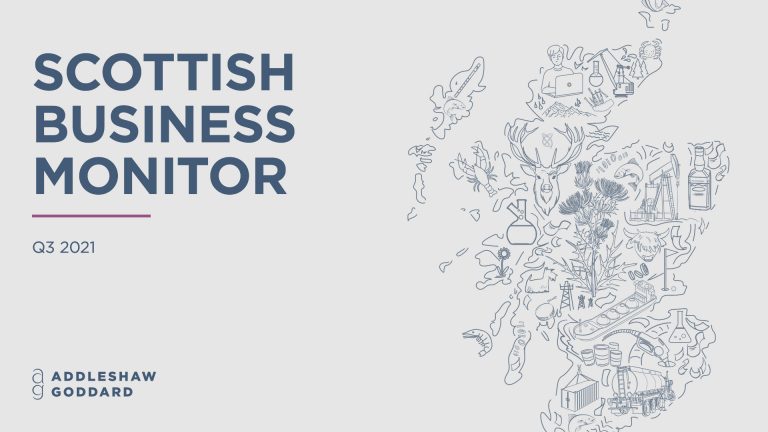 This press release summarises the key results from our latest Fraser of Allander (FAI) Scottish Business Monitor, published in partnership with Addleshaw Goddard.

Scottish businesses are rising to meet the net-zero challenge, with a majority confirming they have committed to or already achieved their carbon neutral aims, as new research shows a second consecutive quarter of growth in all sectors of the economy.

The latest Addleshaw Goddard Business Monitor report – produced in partnership with the University of Strathclyde’s Fraser of Allander Institute – found 56% of companies have committed to achieving net-zero, with 3% already having made the mark.

While international attention remains on COP26 in Glasgow, where world leaders and climate scientists are debating options to accelerate the energy transition, Scottish businesses say the barriers to achieving more sustainable operations are cost (57%), and prioritising recovery from the pandemic (49%).

Key measures already committed to in the push toward net-zero include a commitment to recycling and reducing single-use plastics (78%), and companies’ requiring better sustainable practices in their supply chain (42%), while almost half (47%) of businesses will invest in educating senior management teams on the topic.

A slowdown in recruitment may, however, restrict growing companies’ progress toward reaching their post-COVID potential – 59% had vacancies to hire new staff, of which 86% were finding those roles difficult or very difficult to fill.

Other key findings in the Q3 2021 report include:

Mairi Spowage, Director of the Fraser of Allander Institute, said: “That more than half of Scottish companies have already put a net-zero plan in place speaks volumes for the priority that’s being placed on helping the country meet its climate targets.

“Businesses see the opportunities as well as the challenges that a push towards more sustainable practices and investment behaviour will have, and an increasing proportion recognise the part they have to play in the decarbonisation of our economy.

“When the goals were set in Paris in 2015, nobody imagined a pandemic would coincide with the world’s biggest push toward greater sustainability. These results show the resilience of Scottish businesses with a second quarter of continued growth giving further confidence after the massive impacts felt in 2020.”

Sarah Baillie, Glasgow-based partner and co-head of renewables at Addleshaw Goddard, said: “This is a time of significant change for industry globally, at a stage where business recovery is still underway as we emerge from the pandemic. Seeing Scottish companies commit to net-zero, whilst responding to turbulences in the economy as it rebalances, is extremely encouraging.

“What they will want to see in the coming months is assurance from Government and regulators that the potential costs of making crucial net-zero improvements across all sectors will be minimised.

“Already under pressure to improve their sustainability performance, the impact of global volatility in gas and electricity prices is clearly causing concern, with a quarter of firms indicating they would cut back on business operations as a direct result of price inflation.

“While these reductions are expected to remain small or moderate, a fall or steadying of these core costs would help to allay any fears that the situation could worsen for firms – but for now that will remain a hope rather than an expectation.”

His main areas of focus are economic policy, social care and criminal justice in Scotland. Ben also co-edits the quarter Economic Commentary and has experience in business survey design and dissemination.