Scotland, like the rest of the UK, remains under a national lockdown with over half of Scottish businesses with furloughed staff and a rise in businesses expecting to make staff redundant in the coming weeks.

This week, the Scottish Government published the latest GDP figures for Scotland which showed an estimated contraction of 1.4% in November as increased restrictions were reintroduced across most of the country – this is the first decline since Scotland’s economic recovery began last summer.

The latest headline employment figures for Scotland were published on Tuesday by the ONS, with the Scottish Government’s official summary released yesterday. Scotland’s unemployment rate stood at 4.4% during the period from September – November 2020 – up 0.6-percentage points (p.p.) on the previous year. However, furlough support continues to mask the real impact of the economic crisis on employment. The number of people claiming Universal Credit and Jobseekers allowance started rising again in December and remains significantly above the levels seen last year. 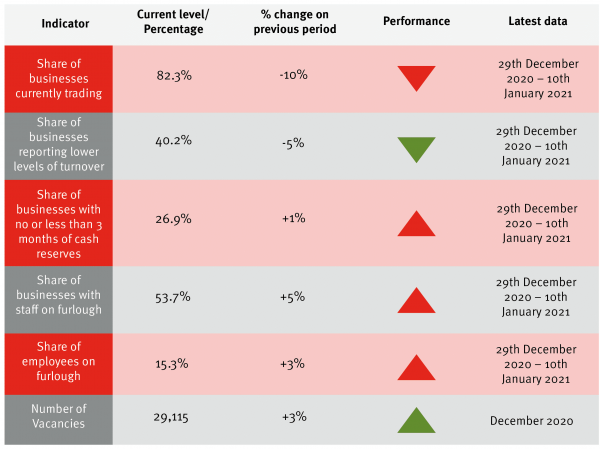 Chart 1: Estimated share of businesses that are currently trading, broken down by industry, Scotland, 15th June 2020 – 10th January 2021: The accommodation & food services and arts, entertainment, and recreation sectors saw the sharpest decline in the number of firms currently trading as a result of the ongoing national lockdown. Businesses in the information and communication, transport & storage, and professional, scientific & technical sectors have so far proved resilient to the current lockdown

Chart 2: Estimated share of workforce on furlough leave, broken down by industry, Scotland, 1st June 2020 – 10th January 2021: Accommodation & food services and arts, entertainment, & recreation continue to be the sectors with the highest share of employees on furlough. They also saw the largest increase in furloughing due to the most recent lockdown. Other sectors of the economy have so far only seen modest increases in the share of furloughed employees.

Chart 4: Growth in median monthly pay from PAYE RTI, UK, January 2020 – December 2020: Median monthly pay increased gradually in the summer months last year as the economy began opening back up however, has experienced slow growth in recent months. In December Scottish median pay grew by 0.8% month-on-month – stronger than the rest of the UK – with the increase in median pay primarily driven by the change in the composition of jobs over the past few months.

Chart 5: Number of people on Universal Credit, Scotland, December 2013 – December 2020: The number of people on Universal Credit has risen by almost 6,900 between November and December 2020. This was the largest monthly increase since July 2020, but still not close to the magnitude seen in April last year. It is important to note that the rise in claimant count includes people who are unemployed and also some who are in employment.

Chart 6: Claimant Count as % of working age population, Scottish local authorities, December 2019 – December 2020:  In terms of increases in claimant count, the most impacted local authority was Glasgow City, which saw a 3.8-p.p increase in the share of working-age people on Universal Credit and Jobseekers Allowance in December 2020, compared to December 2019. This was followed by Aberdeen, and West Dunbartonshire, whilst Inverclyde, Shetland Islands, and Orkney Islands were the least impacted.

*This data may be affected by geographical definition issues, therefore may not tally with other claimant count data.

We review newly available data each fortnight and provide a regularly updated snapshot of indicators that can provide information on how the economy and household finances are changing. This allows us to monitor changes in advance of official data on the economy being released and also to capture key trends that will be missed by measures such as GDP. Each fortnight we investigate new sources from known data sources and use publicly available data.