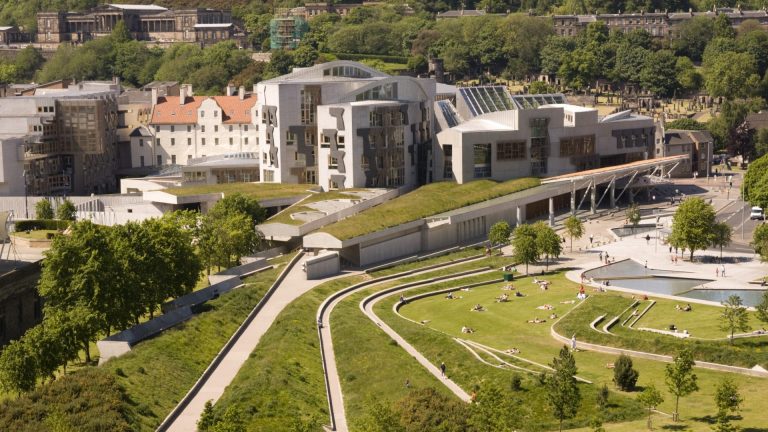 Given that we are still in the relatively early stages of the easing of lockdown measures (these data relate to the period before the reopening of the hospitality sector) it is not surprising that there is little of any big improvements in the economy. Whilst some indicators of activity are showing steady improvement, as discussed in our labour market update yesterday, there are still many concerns over how the situation will evolve over the next few months.

Chart 2: Share of businesses supported, and value of grants awarded from the Scottish Government Business Support Fund across local authorities, 14th July 2020: the Scottish Government has awarded over 86,000 grants valuing over £969m across Scotland. The share of businesses supported and average value of grants has varied widely across Scottish local authorities. The highest share of businesses receiving a grant and highest average award was in Argyll and Bute. Aberdeenshire and Aberdeen City received the lowest share of support and grant value.

Chart 3: Google searches for products and services in Scotland, 5th January – 5th July 2020: after the initial spike in interest after the reopening of High Street Retail stores on the 1st July, interest weakened slightly in the week commencing 5th July. However, interest remained 14% higher compared to the same week last year. Interest in cars has returned to pre-Covid levels, but interest in theatres remains more than 60% lower. Hotels are seeing a gradual recovery in demand with the pending reopening of the hospitality sector in Scotland.

Chart 5: Vacancy index by sector in Scotland, June 2020: the RBS vacancy index shows that the number of permanent vacancies, reported by recruitment consultancies, declined in all sectors of the Scottish economy in June compared to May. Temporary vacancies also declined in June, with the exception of blue-collar jobs.

Chart 6: Salary index in Scotland, January – June 2020: Scottish recruitment consultancies reported a fall in the salaries of permanent new joiners in June. The rate of decline was the fastest recorded since the series began in January 2003. Hourly wages for temporary workers in Scotland also continued to decline in June.

Chart 7: Index of Private Housing Rental Prices, percentage change over 12 months, UK, January 2016 – June 2020: rental prices in Scotland grew by 0.6% on last year – the slowest growth in the UK. We are yet to see a significant effect of the lockdown, which may be a feature of fluctuations in supply and demand taking time to feed into rental prices. According to the latest UK Residential Market Survey, tenant demand in Scotland fell by more than 20% in the three months until July – the largest decline out of all UK regions. The survey also shows market expectations point to a decline in prices in the coming months.

We review newly available data each week and provide a regularly updated snapshot of indicators which can provide information on how the economy and household finances are changing week to week. This allows us to monitor changes in advance of official data on the economy being released and also to capture key trends that will be missed by measures such as GDP. Each week we investigate new sources from known data sources and use publicly available data.