Some of the parties have committed to infrastructure or capital programmes, which can have very large sums attached to them over multiple years.

Often, though, there will also be estimates for the number of jobs “created” or “supported” due to these programmes. But how do the parties come up with these numbers?

Economic Activity of all types will generate what is called economic multiplier effects. So, investment in building, say, a new hospital, will directly generate lots of activity in the construction sector. However, that contractor will also need to buy materials, and employ others to provide services, therefore generating a significant indirect economic effect in their supply chain. In addition, both the construction company, and all the companies in its supply chain, pay their workers wages which they will spend in the supermarket, in pubs and restaurants and so on. We call this last one the induced effect. 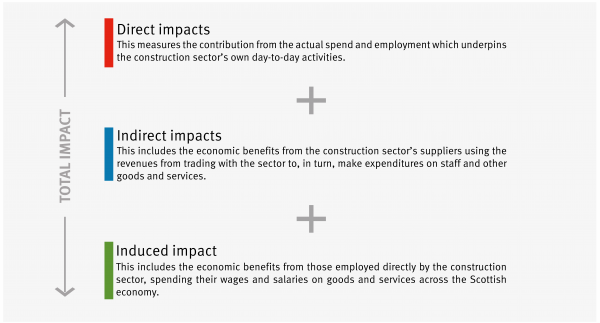 So, these are the three types of effects we think about when thinking about the economic impact of spending. This generates output and gross value added in our economy: and of course supports jobs as well. However, the size of these multipliers varies hugely by sector.

So, if there is investment of £1m into the Agriculture industry then this is estimated to support over 10 full-time equivalent (FTE) jobs directly, over 4 jobs indirectly and just under 3 jobs through the induced effect. Once all of these effects are accounted for, over 17 FTE jobs are estimated to be supported across the Scottish economy. In terms of GVA, for every £1m spent in Agriculture, an estimated £0.88m in Scottish GVA is supported.

A momentary geeky detour, but stay with me…

These multiplier numbers are derived from the Scottish Input-Output tables. These tables set out the structure of the Scottish economy, including all the supply chain linkages and how likely sectors are to import or export, which allows us to understand how economic activity ripples through the economy.

These tables, produced every year by the Scottish Government, are an amazing resource for economic modellers like ourselves to help us understand the impact of different sectors and spending programmes, whether that is the pharmaceutical sector, the aerospace sector, a housing building programme, or the spending carried out by a particular organisation.

We also regularly use the tables for the UK (produced by the ONS) and those for Northern Ireland (produced by NISRA).

So, we know now how broadly where multipliers come from. When we see numbers quoted in a press release or a report from any organisation, or indeed in a manifesto for the elections, we would run though the following questions to understand the numbers and put them in context:

Generally, we would expect that it is either the Direct+Indirect or Direct+Indirect+Induced. Obviously, the latter is by definition the bigger number, so is often used. We can often get a clue that indirect and induced jobs are included when the description moves from being jobs “created” to jobs “supported”, given the extra steps removed these effects are from the actual investment.

There is no “right” set of numbers to use: the impact that wage spending can have in the economy is both significant and important to consider. But it is of a different nature to the direct and indirect effects: sometimes the interest is in, for example, supply chain effects.

You might be wondering why this is important. The Scottish economy is of course included in the UK economy.

When considering the impact of an investment on the UK economy, we need to consider how much “leakage” there is from each sector: that is, how much of each sector in the supply chain is imported into the UK. If we know, for example, that around 22% of Fishing & Aquaculture is imported, then the economic impact of this leaks out of the UK economy.

If we are then examining the economic impact on Scotland, or Northern Ireland, or London, or any constituent part of the UK, we also need to consider an additional leakage: the imports that come from the rest of the UK. For Scotland, this is a significant flow, with imports from rUK equivalent to 12% of the Scottish economy.[1]

So because there is this additional leakage, the economic impact of a particular bit of spending will always be larger for the UK economy than the Scottish economy. Looking at this the other way, investment in Scotland will generate economic benefits not just for Scotland, but also for the economy in the rest of the UK.

So it is important for us to know which economy the parties are talking about to put the numbers in context.

This is absolutely critical to understand the economic impact: many of the announcements are for over the period of the parliament (or in some cases longer).

So, for example, if there is an announcement that there will be £100m spent over 5 years on an infrastructure programme, which using the construction coefficients and multipliers should support 1,783 jobs type 2 (direct+indirect+induced).

Again, this is critical for us to understand the impact of any announcement. For example, if parties explicitly say that they are spending money on X rather than Y, then it is important to consider the differential impact between spending money in different ways.

A few other issues to consider

The final issue above is an important one when considering these types of announcements. Therefore, it is also reasonable to ask:

When policies are being considered, the Treasury Guidance in the Green Book sets this all out – including how to consider wider impacts than just economic, and, new in the latest edition, to consider whether there are interventions that benefit a particular place, in line with the UK Government’s Levelling up agenda.

Announcements like this also don’t normally consider issues around labour supply, so it is worth considering whether there is the capacity in our economy with the right skills, to provide people for all these roles.

Jobs numbers as part of Government or election announcements are not unusual, and they can be an important metric to assess the potential scale and impact of policies. The can be an eye catching part of policy announcements, and can often be more tangible to people than contributions to GDP.

However, given the issues discussed in this article, it is important to probe these figures to ensure we are comparing like with like.

In the manifestos, the source for some of the numbers have been set out clearly: others are more opaque. It is not always easy to tell how many years the numbers are referring to in the manifestos, which can make it difficult to put the impact claimed in context and compare them between parties.

Sometimes, the incentives can be to make the numbers as large as possible, for obvious reasons. So, the next time you see a jobs announcement like this, make sure you bear these questions in mind!

[1] It is worth saying that this flow is difficult to estimate given the way that economic data is collected in the UK. For a summary of the issues in the estimation of interregional trade, see the following paper published as part of our research for the Economic Statistics Centre of Excellence