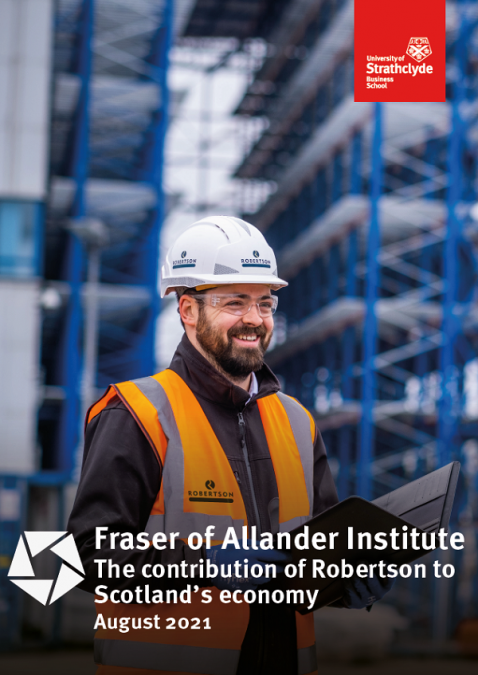 The contribution of Robertson to Scotland’s economy

Robertson is one of the largest family-owned construction, infrastructure, development and support services businesses in the UK.

With over fifty years of experience across a diverse group of sectors and projects, Robertson has a significant impact on the Scottish economy.

This report evaluates Robertson’s economic contribution to Scotland in terms of the jobs and Gross Value Added (GVA) its activities support.

Robertson has eight main divisions across Scotland. Of these, investment from the Major Projects division supports the greatest amount of employment and economic activity across the Scottish economy.

This report finds that the collective investment from Robertson’s Major Projects, Specialist and Civils divisions, from 2018/19 – 2020/21, is estimated to have supported –

But, Robertson’s contribution to the Scottish economy extends beyond these traditional economic metrics.

Robertson is committed to supporting the economy’s fight against climate change. Additionally, Robertson’s focus on local supply chains and investing in Scottish communities provides employment and earnings opportunities in some of the most deprived areas in Scotland, helping Scotland tackle its inequalities grand challenge.

For example, Glasgow and Dundee are the 1st and 4th most deprived local authorities in Scotland according to the Scottish Index of Multiple Deprivation (SIMD 2020).

This report finds that –

This report assesses Robertson’s economic contribution alongside its wider impact to highlight this construction firm’s role in the Scottish economy.