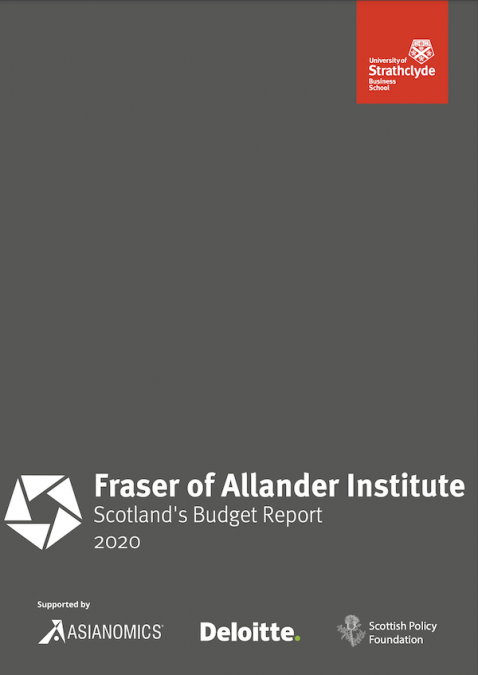 Recent positive news on vaccine development raises expectations that 2021/22 will herald the beginnings of a recovery from both the health and economic shocks caused by Covid in 2020. But the precise path of that recovery remains very uncertain. It will depend on the pace of the vaccination programme, the effectiveness of the vaccine and test-and-trace programmes in containing the virus, and the pace at which health restrictions can be lifted as a result.

As well as the pace at which restrictions can be lifted, the outlook for the economy will depend on the degree of structural damage wrought by the crisis, and the extent to which households unwind significant savings increases during 2020.

A key implication of this uncertainty is that budgets and fiscal policy will need to take a flexible and adaptive approach to supporting the health and economic recovery during 2021/22. The Scottish Government’s budget for 2021/22 is due to be published on 28 January.

The UK Government’s Spending Review 2020 implies that the Scottish budget will receive £1.3bn of funding to address health and economic implications of Covid in 2021/22. This is significantly lower than the £8.2bn received in 2020/21.

It is likely that further Covid resources will flow to the Scottish budget if the recovery across the UK is more protracted than is implicitly assumed by the UK Government in its current spending plans. But until then, the Scottish Government has to set its plans on the basis of confirmed resources. In setting its budget, it will have to decide which elements of Covid support it can unwind most quickly, and which it must continue to fund in some way in the early part of 2021/22. Health is likely to absorb much of the Covid funding in 2021, leaving difficult decisions about how to balance remaining support between different sorts of businesses, household and organisations.

There is a case for saying that the Scottish Government should have greater funding certainty and/or additional funding flexibility. This could come through some combination of enhanced commitments on intergovernmental coordination and communication on funding decisions; an extension of the guaranteed funding approach during 2021/22; and enhance powers over borrowing or use of cash reserves.

The Scottish Government’s block grant for core (i.e. excluding emergency covid support) resource spending is set to increase by £1.2bn in 2021/22, implying average annual real terms growth of 3.8% since 2019/20. The Scottish resource block grant will therefore be back to pre-austerity real terms levels next year, although this is not the same as saying its spending power will be back to pre-austerity levels (Scotland’s population is larger and the government’s ‘core’ responsibilities are wider).

The Scottish budget is determined by a number of factors beyond the block grant itself (which include devolved tax revenues, use of reserves, additional resources for social security). The budget faces a number of upside and downside risks, but there is no strong reason at the moment to think that these factors will materially influence the outlook for spending growth in 2021/22, beyond the impact of the block grant.

As well as the challenging decisions on how to allocate diminished Covid-related spending, the government faces the usual spending decisions of ‘normal times’ too. Despite the fact that there are few ‘new’ spending commitments for 2021/22, funding settlements for some portfolios may not feel particularly generous if health consequentials – which account for the majority of the £1.2bn increase in the block grant – are passed on to health. It will be interesting too to see whether the Scottish Government will feel able to provide a more generous public sector pay settlement than set out by the Chancellor Rishi Sunak for the UK.

In deciding how to use its income tax powers to support the economic recovery in 2021/22, the Scottish Government will need to navigate a complex range of economic and political factors, all underpinned by significant uncertainty. Some may argue that tax cuts are an effective strategy to stimulate the economy. But in a devolved context such arguments are likely misplaced. The government must run a balanced budget, and any increase in private spending as a result of tax cuts would likely be more than offset by falls in government spending. Given these complexities and uncertainties, a hedge-the-bets policy of ‘no change’ is perhaps therefore the most likely.

Decisions on council tax invariably feel unsatisfactory. Freezing the tax deprives local authorities of much needed revenue. But tax increases are invariably unfair. The tax is poorly related to property value and regressive with respect to income.

These trade-offs are particularly acute at the current time. The case for reform of the tax remains clear. Until then, council tax decisions leave the government stuck between a rock and a hard place. A further rise this year seems inevitable. But as a mechanism to raise revenue for public spending, it is difficult to avoid the conclusion that income tax rises would be objectively fairer.

The Scottish Government’s block grant for capital spending is on track to increase by less than £100m in 2021/22 according to Spending Review plans. Nonetheless, coming on the back of a substantial uplift in 2020/21, this will take the capital block grant back to its pre-austerity high in real terms by 2021/22. And there is reason to believe that additional capital consequentials will be added to the block grant for 2021/22 in due course, as the UK Government has not yet set formal allocations for its vaunted ‘Levelling up fund’. This fund will apply in England but generate consequentials for Scotland.

An expectation of the UK Government’s Spending Review 2020 was that it would set out further detail of the UK Shared Prosperity Fund (UKSPF), the replacement for EU Structural Funds in a post-Brexit world. The Scottish Government has two concerns about the UKSPF. One relates to the level of UKSPF that will flow to Scotland, and the extent to which this offsets the loss of EU Structural Funds. The other is that the fund will be managed at a UK level, with the Scottish Government potentially having limited influence on the design and operation of the funding in Scotland.

The UK Spending Review did little to allay these concerns. 2021/22 is treated as a transitionary year, with UKSPF funding significantly lower than under predecessor funds – although with an expectation will ramp up in subsequent years to match current EU funding levels. And Spending Review 2020 reiterated the UK-wide aspect of the scheme’s delivery.

The backdrop to the Scottish budget will be significant uncertainty around the economic and health outlook; ongoing intergovernmental tensions on a variety of matters including funding flexibility and certainty, potentially exacerbated following a no-deal exit from the EU transition agreement; and the Scottish elections in May. The inevitable politicking around all this will hopefully not detract from a focus on the core issues the budget must address.