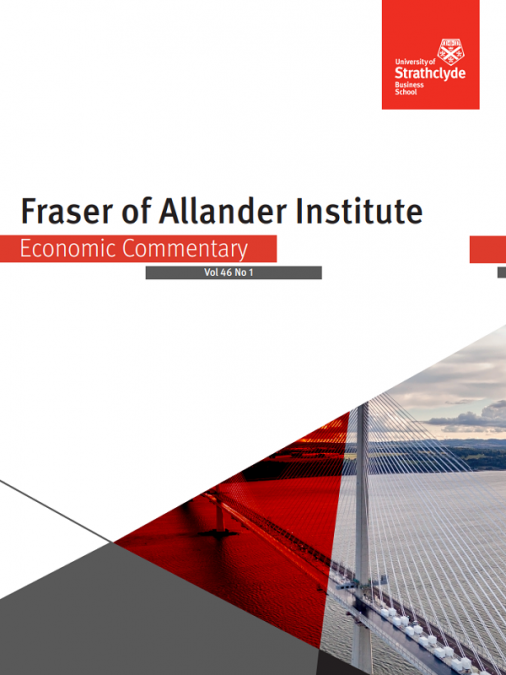 The Scottish economy had shown healthy growth before contracting in April, but the cost of living crisis means that consumers are spending less on non-essentials

Scotland’s economic growth forecast for 2023 has been revised down due to the impacts of cost increases on consumers and businesses, and the likelihood that these will persist for longer than previously thought.

This is according to the latest quarterly Economic Commentary from the Fraser of Allander Institute at the University of Strathclyde.

In the Deloitte-sponsored Economic Commentary, the Institute forecasts growth of 3.8% in 2022 and 0.5% in 2023. The outlook has significantly worsened for 2023 since the last set of forecasts in March 2022.

The Commentary examines the latest data on the global, UK and Scottish economies, including detailed analysis of the latest GDP, employment and inflation figures.

It is not just food and fuel, however. The analysis shows that the costs of property, both rental and ownership, are also increasing significantly.

Director of the Institute, Professor Mairi Spowage, said: “The data published yesterday on the Scottish economy shows that the recovery from the pandemic is starting to falter.

“The analysis we have carried out for this quarter’s commentary, indicates that inflation will be higher and persist for longer than we thought in March.

“This has the potential to limit the economic recovery we hope to see during 2022 and 2023, as consumers cut back on discretionary spending, and businesses limit production due to input costs.

“These circumstances have led us to revise down our expectations for growth during 2023. Of course economic forecasting is a tricky business at the best of times, but forecasts are highly uncertain right now.”

Angela Mitchell, Senior Partner for Deloitte in Scotland, said: “While Scotland’s economic recovery was well underway in the first quarter of 2022, challenges for businesses are likely to remain throughout this year as a result of the cost-of-living pressures driven by both rising inflation and interest rates.

“In this context, the risks posed to future economic growth are in plain sight. Weaker demand, higher costs and, in particular, uncertainty inhibit the likelihood of investment and growth.

“For business leaders, focus must turn to ways to foster productivity which are not solely dependent on the ups and downs of the economic cycle but can be driven by other factors, including prioritising technology innovation and digital transformation.

“Organisations should consider the changing nature of work and draw on their experiences developed during the pandemic to bolster resilience and ensure a path through the current economic climate.”

This quarter’s commentary also analyses the latest outlook for public finances in Scotland, following the publication of the Scottish Government’s Resource Spending Review and new forecasts from the Scottish Fiscal Commission.

The review covers the government’s spending plans for the remainder of this term of parliament – from 2023/24 to 2026/27.

David Eiser, Deputy Director of the Institute, said “The government deserves some credit for setting out its plans despite significant uncertainty in its budget, and the stark reality of its spending decisions.

“But having made significant funding commitments on social security, and more modest commitments on health, the implication is of funding cuts for many other areas of public spending, including local government, much of policing and justice, higher education and enterprise support.

“This outcome is not a surprise – we highlighted it in our budget report last year what the implications were likely to be of the government’s decisions to prioritise social security and health within a constrained overall settlement. But it is welcome that the government explicitly accepts that outcome of its policy decisions, and the spending review, as this analysis will form the basis of more rigorous debate about the public finances in the months ahead.