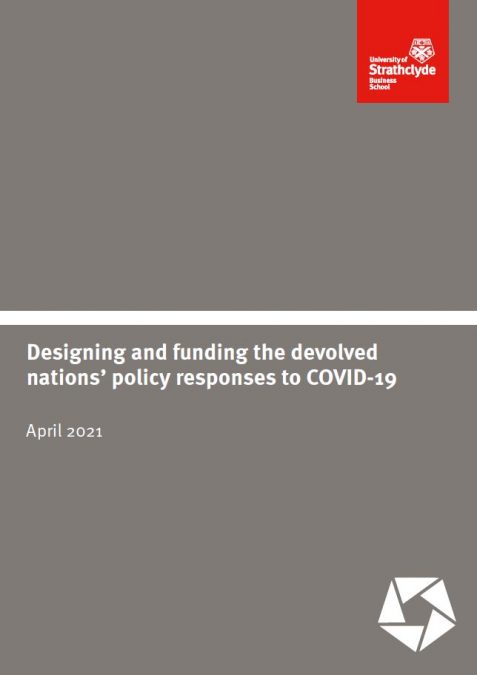 The UK’s three devolved governments, in Scotland, Wales and Northern Ireland, are responsible for designing and implementing large parts of the public health response to the COVID-19 crisis in their respective territories. This includes the nature and extent of social restrictions, contact tracing programmes, and vaccination rollout (although the vaccines were procured by the UK government).

The devolved governments are also responsible for designing and implementing large parts of the economic response, including support to businesses and other organisations through grants. However, the furlough scheme, similar income support schemes for the self-employed, and changes to the rates of Universal Credit, are policies of the UK government that apply UK-wide.

To fund most of their expenditure – including virtually all their COVID-19 expenditure – the three devolved governments rely on block grants from Westminster – although recent years have seen an increased share of the Scottish and Welsh governments’ budgets come from newly devolved taxes.

The COVID-19 pandemic poses a number of risks or challenges to the funding of the devolved governments. Most obviously, these include the risk that the health or economic impacts of the pandemic fall disproportionately in one nation over others. If this situation arises, the lack of any explicit consideration of funding ‘need’ in current funding arrangements may lead to this nation lacking the finance required to meet the challenges posed by the pandemic, in turn posing risks to the wider UK. Moreover, the nature of the funding settlements themselves may limit the devolved governments’ ability to respond to the pandemic in a way that reflects their assessment of the risks, if for example the feasibility of public health restrictions is contingent on the level of furlough support that the UK government has committed to.

We have recently embarked on a year-long project to examine how effective the devolved governments’ funding settlements have been in enabling them to respond adequately to the COVID-19 pandemic as it has unfolded. We are also considering what changes to financing arrangements may be worthwhile to improve robustness to future shocks and support recovery from the current shock. The project will run from March 2021 to March 2022 and is being funded by the Economic and Social Research Council (ESRC) as part of UK Research and Innovation’s rapid response to COVID-19.

This report is the first output from the project. It aims are to highlight the funding issues that could have arisen as a result of the COVID-19 pandemic, assess whether they have in fact arisen, and how they have been addressed. The paper also looks forward to some emerging and imminent issues in devolved government funding, including the planned review of the Scottish fiscal framework later in 2021, and the changes to funding arrangements that may arise from the new Internal Market Act and the replacement of EU structural funds post-Brexit. But the aim of this introductory paper is to focus on the issues and questions that are emerging, rather than to suggest or propose changes – this will come during later stages of the research project.

This project is funded by the Economic and Social Research Council as part of UK Research and Innovation’s rapid response to COVID-19, grant reference ES/W00173X/1.

David Bell is Professor of Economics at the University of Stirling and a Fellow of the Centre on Constitutional Change.

David Phillips is Associate Director at the Institute for Fiscal Studies.

This project will examine how effective the funding frameworks of the UK’s devolved governments have been in enabling the devolved governments to plan and deliver the response to COVID-19 in their respective territories and make recommendations to improve the operation of those funding frameworks.
Explore the collection
Listen to the Podcast
Address
Privacy Policy
Cookie Policy
Contact us
Contact