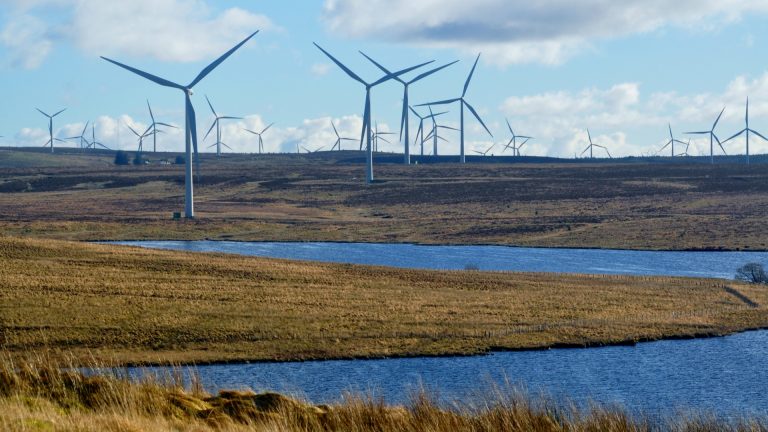 With COP 26 coming to an end in Glasgow this week, the climate is firmly back on the international agenda and a step change is required to avoid the very worst impacts of climate change.

Domestically, the UK and Scottish Governments have committed to net-zero targets by 2050 and 2045 respectively. But how will these be achieved?

In some regards, the success so far of decarbonising much of Scotland’s electricity supply is the easy part. Most people have noticed little change in their day-to-day lives as a result.

Undoubtedly, to reach our net-zero targets will require difficult but essential decisions to be made, both now and in the future. This will mean challenging how we travel, how we heat our homes, the structure of local economies, and potentially our cost of living over the medium term.

Trade-offs undoubtedly exist between Scotland’s current economic structure and its net-zero ambitions. But the transition to net-zero should not be seen in isolation as a grim picture of difficult decisions.

Opportunities to minimise these trade-offs will not only mitigate potential damage to people’s livelihoods but, by reducing resistance to far-reaching change, can help Scotland combat climate change.

For evidence of this, we can travel back in time to the 1960s and early 1970s Aberdeen. Male wages in Aberdeen were over 10% lower than Scotland and UK averages, while the area experienced widespread emigration.

The Forties Oil Field was discovered in 1970, and the first oil was produced by 1975. This marked the starting point of the upheaval in Aberdeen’s economic structure.

Less than a decade after the oil started flowing, one in four jobs in Aberdeen were oil-related.

The potential for renewables to provide significant but sustainable opportunities for many local economies cannot be understated.

However, we cannot expect to sleepwalk into prosperity. Seizing the full economic opportunities of renewables not only means building wind farms and solar panels it also requires a robust domestic renewable supply chain.

Measuring the contribution of renewables to Scotland’s economy

Despite the widespread attention of renewables over the past couple of decades, data on how renewables interact with our economy is relatively sparse.

Part of this can be attributed to the slow-moving nature of internationally agreed economic classifications, which determines how many of the Scottish and UK Governments’ key datasets are produced. There is no such thing as a renewable energy sector, for example.

The Office for National Statistics has responded by producing a survey to better understand renewables – the Low Carbon and Renewable Energy Economy survey. However, the lack of a renewable energy sector embedded into National Accounts makes it challenging to understand how other industries interact with renewable activities and, in turn, the true economic impact.

This year, we undertook research to help close this gap. We aimed to answer three key questions:

To do this, we used data on renewables in Scotland to create a newly defined renewables sector embedded within the Scottish Government’s National Accounts.

The size of the renewables sector

Our first finding was that, in 2019, renewable technologies supported 6,440 full-time equivalent jobs in Scotland.

This includes the major renewable technologies such as wind, solar, hydro, and more. But it excludes the technologies often included in quoted statistics – energy-efficient lighting and products, low emission vehicles, and nuclear power.

It also supported £1.1 billion in gross value added (GVA), a measure of the economy closely related to GDP. This is larger than the GVA of the gambling sector, machinery, travel agencies, and almost three times the size of the advertising industry.

But industries do not exist in a vacuum. To construct wind turbines and hydroelectric dams, goods and services need to be bought from other firms. And, in turn, these firms need to purchase their supplies. These supply chain purchases can be far-reaching and impact the whole economy.

So, what is the full impact on the economy?

The economy-wide impact of renewable technologies can be separated into three types of impact:

Including all of these impacts, renewable activities support the Scottish economy to the tune of £2.3bn gross value added and 22,660 full-time equivalent jobs.

This includes thousands of jobs supported in manufacturing, energy, construction, retail, and accommodation & food services. Many of which are supported several layers down in the supply chain, or due to wage spending, may be unaware of the connection with renewables.

Technologies of today and the future

Using the same methodology we can examine the impact of each of the eight renewable technologies on the Scottish economy.

We find that onshore and offshore wind support the largest number of jobs, making up 58% of the total. This is unsurprising given the rapid expansion of wind projects over the past decades.

And how could this change in the future?

Renewable energy projects typically require several years to plan and construct, and so we can look towards renewable electricity projects currently in the pipeline as a guide to the near future.

And renewable electricity provides opportunities for the rural parts of Scotland.

21% of capacity currently in planning or under construction is based in the Highlands, 16% in Dumfries and Galloway, 5% in Shetland Islands, and 4% in Argyll & Bute.

Many of these areas have missed out on the strong economic growth of Edinburgh and its surrounding areas over the past decades. If these projects are successfully connected to local supply chains, they could provide a vital source of economic prosperity for these areas.

While the outlook for renewable electricity is positive, it only accounts for 22% of final energy consumption in Scotland.

A step-change in how we heat our homes and travel is required to achieve our net-zero targets: we are still building houses with gas boilers, and we are likely to have to reduce travel in individual vehicles as well as decarbonise the transport system overall.

But, as Scotland’s success so far in decarbonising its electricity supply has shown, progress like this can bring incredible opportunities to build a new type of economy.

What is clear is that a bold and ambitious approach by policy makers and business leaders– at a scale and pace not seen since the industrial revolution – will be required to make the step-change we need to see to achieve our climate goals.